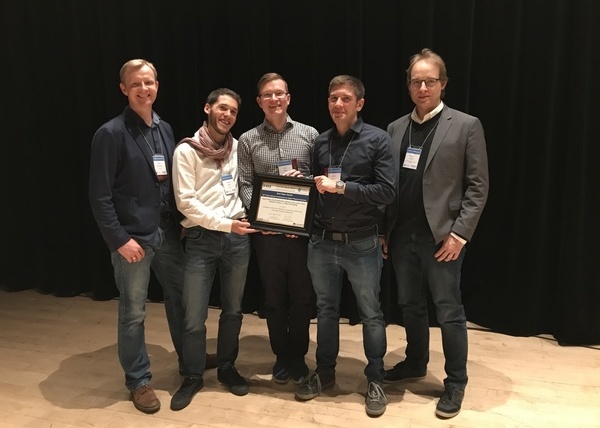 Montreal - The paper titled “Feedback Control Goes Wireless: Guaranteed Stability over Low-power Multi-hop Networks”, a collaboration between the Max Planck and Cyber Valley Research Group on Intelligent Control Systems at the Max Planck Institute for Intelligent Systems (MPI-IS), the Networked Embedded Systems Group at TU Dresden, and the Computer Engineering and Networks Lab at ETH Zurich won the Best Paper Award at this year’s ACM/IEEE International Conference for Cyber-physical Systems (ICCPS). The authors are Dominik Baumann and Sebastian Trimpe from the MPI-IS, Fabian Mager and Marco Zimmerling from TU Dresden, and Romain Jacob and Lothar Thiele from ETH Zurich. This research is the result of a long-standing collaboration between the scientists at the three institutions and has been supported within the DFG Priority Program on Cyber-physical Networking.

ICCPS is the premier single-track conference for reporting advances in all areas of cyber-physical systems, including theory, tools, applications, systems, testbeds and field deployments. The conference took place in Montreal, Canada as part of the CPS-IoT Week, which brings together five top conferences related to Cyber-physical Systems (CPS) and the Internet of Things (IoT). During this joint event, the scientists also ran a live demo of their wireless control testbed – and won a second prize. Their live demonstration received the Best Demo Award of the ACM/IEEE International Conference on Information Processing in Sensor Networks (IPSN), another conference of CPS-IoT Week. A video featuring the research can be seen here.

The research addresses the problem of closing fast feedback loops over multi-hop wireless networks with stability guarantees. This is key to emerging applications, for example for motion control in teams of robots and swarm coordination. More details can be found here.

Watch the video of the presentation for the best paper at ICCPS here: https://youtu.be/1i6oBsat_Ww.

Or watch a video produced by Quanser, who helped with the technology, here.